In an earlier post I wrote about Grocer R.F. Maddigan’s venture into postcard distribution and provided a visual guide to the cards I knew of at that time.  Since then I have acquired images of a number of additional cards and have revised the visual listing of Maddigan cards for Prince Edward Island to show all 60 of the cards that I have been able to locate.

From this it is clear that he was a major player in the postcard business in the province, likely serving as a wholesale distributor.  He certainly did not publish his own cards and those appearing with his name came from a large number of publishers. The listing shows cards with the Maddigan name that were clearly the same as those from Pugh, McCoy, Valentine and even one card from Warwick & Rutter. To date I have identified nine different card backs suggesting that he changed suppliers frequently.  Trade publications suggest that it was easy to acquire cards and simply by sending images to the publisher one could arrange to have them printed under your own name. Selecting an image already appearing on cards with another’s name on them was not considered a barrier as with limited exceptions copyrights were not filed.

This makes it doubly difficult to get a handle on how many different Maddigan cards are out there.  To date I have identified 60 cards under the R.F. Maddigan name but I have little doubt there are many more in collections that have not been discovered.  The current listing includes images from my own collection, from public holdings available on-line and those of other collectors.  I am particularly indebted to Phil Culhane of Ottawa who has graciously permitted use of information from his site at http://www.peipostcards.ca  As always I am interested in learning of images that I have not included to date.

The latest listing has cards sorted by location and then alphabetically by title.  If the card contains a catalogue number it has been posted to the entry.

Charlottetown’s Victoria Park was established in 1875. It was carved from a property on the western side of the city designated as the Governor’s Farm.  When Charlottetown was laid out it had five squares: Queens, Kings, Pownal, Hillsborough and Rochford. By the mid 1800s these were becoming inadequate to the city’s needs. Queens Square was occupied by the market and other public buildings, Pownal Square housed the city jail. A chance to set aside public space on the waterfront was lost when the Imperial government gave up the ordnance grounds at the west end of Water Street. The colonial authorities decided to auction the lots off instead of establishing a park. The possibility of turning over part of the Governor’s Farm for a park was raised in 1869 and was discussed during the negotiations leading to the Island’s entry into Confederation.

Finally in 1875 40 acres constituting the westernmost part of the farm  were handed over to the city. The grant excluded the Prince Edward Battery which was retained for military uses. By 1880 the field nearest the harbour was identified as a cricket ground and one near Brighton Road (now Memorial Field) became a parade ground for the several military units in the city.  Access to the park was from Brighton Road because the proposed roadway extending Kent Street in front of Government House was opposed by various Lieutenant Governors until 1896. The roadway to the Battery was completed a year later and was extended to join Brighton Road in 1899. In 1905 additional land was carved out of the Government House Farm and the Park reached the size it has today.

As the premier recreational space the Park was the subject of many postcards highlighting the natural setting and the activities which took place there. First and foremost it provided a vantage point of the harbour with the open channel to Hillsborough Bay.

An extremely popular postcard subject was the view from the Prince Edward Battery (usually misidentified as Fort Edward) back toward the city. A single image was used by a number of publishers and others appeared which were only slight variations of the view.

In the early 1900s the military installation was still very much in use. The main army drill hall and other structures were on the east side of Governor’s Pond. The Battery was used by the artillery for both training and ceremonial uses. The 4th Artillery Regiment was particularly successful in Dominion competition and frequently led the country in the national results.

The annual Militia camps took place in the park until the Great War and provided an entertainment for visitors and residents of Charlottetown. Militia groups came from across the Island to set up camp in the Park and engaged in drills and competition while under canvas. The patriotism of the Boer War period made membership in the militia a popular form of comradeship and interest in civilian soldiers continued through to the Great War.

But military camps were not the only users of the park. Although there were limitations on the use of the park for shows and commercial activities which had a paid admission charge, community groups were frequent users.

The vast majority of the early postcards images of Victoria Park deal with the natural views in the park.  A number of carriage lanes, some still in use as pathways today, had been opened in the predominantly birch forest and the striking groves of white birches served as both subject and background for Charlottetown photographers. W.S. Louson, whose photos were used by the Toronto postcard firm Warwick Bros. & Rutter was particularly enamoured by the park as a photo venue. [click an image to enlarge or begin slide show] 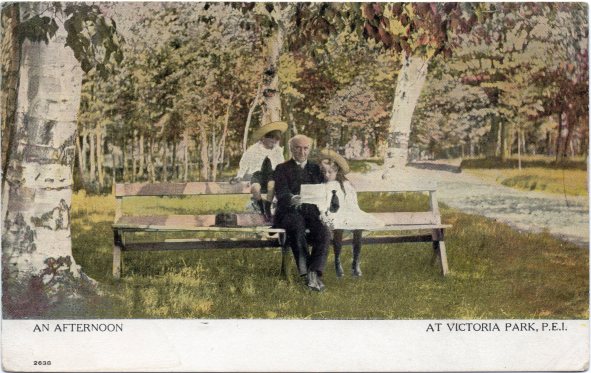 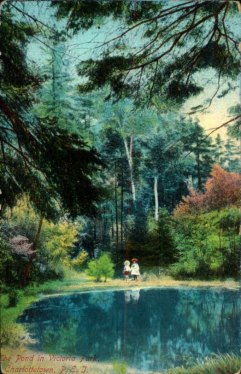 The Pond in Victoria Park (Deadman’s Pond) In the 1930s as a works project 500 cartloads of mud were dredged from the pond and spread on low areas in the park. Stedman Bros. postcard

The tennis courts can be seen to the right in this photo. Wawick Bros. & Rutter postcard #1741 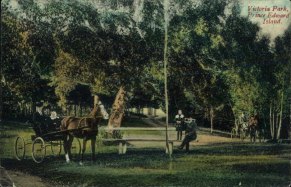 Victoria Park was a popular spot for carriage rides until the age of the automobile. Taylor’s Book Store postcard. 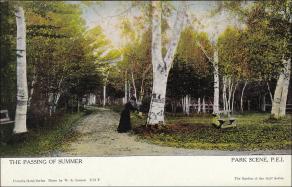 Today Victoria Park continues to be the site of postcard views and increased use of the park had led to more and more structures; fieldhouses, a bandshell, and changing rooms. During the Edwardian era the only buildings were the battery magazine, the tennis pavilion and the keepers house. Now it becoming overbuilt and is harder and harder to pretend, as our ancestors did in the beginning of the 20th century,  that the park represents a bit of the country in the city.

During the golden age of postcards national printers, publishers and distributors blanketed the country with penny  images. National firms such as Valentine, Stedman, and Warwick & Rutter made sure they had postcards from every province and territory.  But there were scores, or perhaps hundreds, of others who got in on the game at a local level.  On Prince Edward Island firms such as Haszard & Moore and Carter & Company had an easily understandable link to the cards; the former as a printer and publisher and the latter as a stationer.  However there were also less obvious connections and some merchants gave posts cards a whirl even though it may have been somewhat removed from their core business. Until recently these local publishers or distributors have attracted little attention from collectors and it is difficult to find information about them.

One such businessman on Prince Edward Island was Richard F. Maddigan.  Born in 1867 Maddigan worked in the grocery business with W. Grant and Company in Charlottetown and in 1900 he took over the operation on the west side of Queen Street between Dorchester and Sydney streets changing the business name to R.F. Maddigan and Co.  He operated a conventional grocery business but by 1906 had branched out into the manufacture of “Temperance Beverages” (soft drinks) and advertised that he could supply “everything required for fitting out saloons.”  The following year he took over the rival Ferris and Frederickson Aereated Water Business.  Today bottles from both of these companies are greatly sought by collectors.

Four years later an advertisement appeared suggesting thatMaddigan had once again expanded his interests.  Directed at country post offices and stores he advertised that he had 80 varieties of cards available.  Richard Maddigan had gone into the postcard business.   It is not clear if the 80 varieties referred only to view cards or to other cards which might have been comical or topical in nature.  I have been able to identify about 25 cards with the Maddigan name and there are no doubt others about. I would be interested in hearing of other Maddigan titles. The cards show images from a number of different Island communities.

Maddigan seems to have purchased his cards from a variety of suppliers. Many of the images appear on cards identified with other publishers and in several cases these names appear on the cards along with that of Maddigan.

The card backs indicate at least 5 different designs appear suggesting a variety of printers/publishers were used.  One of the more common of the designs has a unique card number in the format XXX-XX on the lower right bottom edge of the card back which may give a clue as to the printer. The same card backs and number system are found on cards from the Pugh Manufacturing Company, recently the subject of new information on the Toronto Postcard Club site. Some other cards are noted as “Printed in Great Britain”, others are from printers in Saxony.  Because of the variety of images and printers and lack of consistency in type faces on the card captions it is difficult to identify a typical “Maddigan card”.  Images of a number of cards bearing the Maddigan imprint are shown below to illustrate the design and colour ranges. Click on any image in enlarge. A more complete catalogue of known Maddigan cards can be found here. 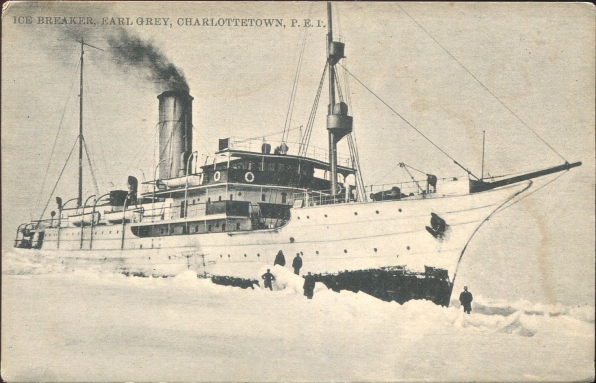 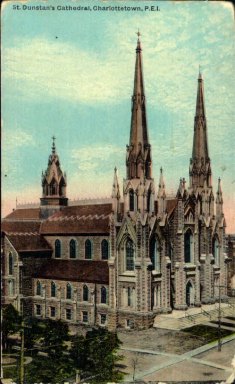 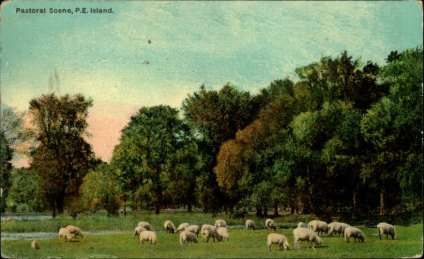 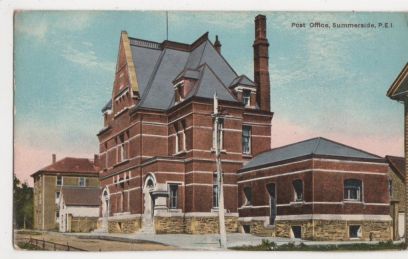 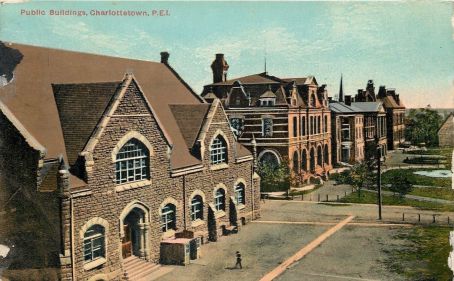 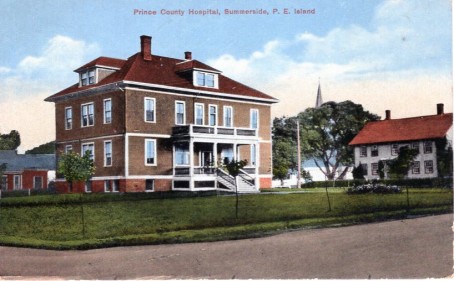 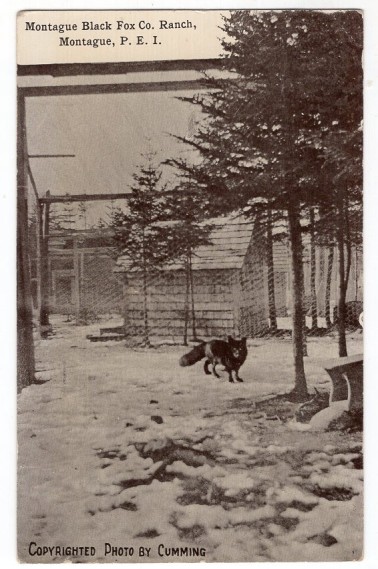 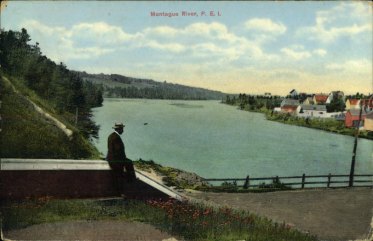 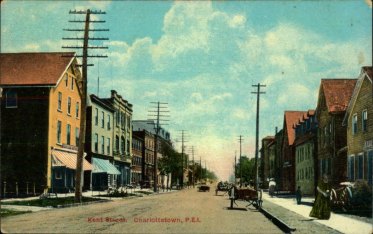 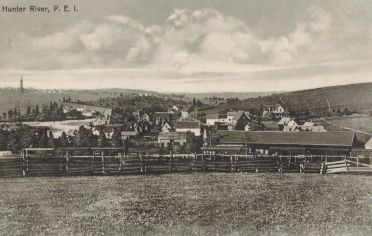 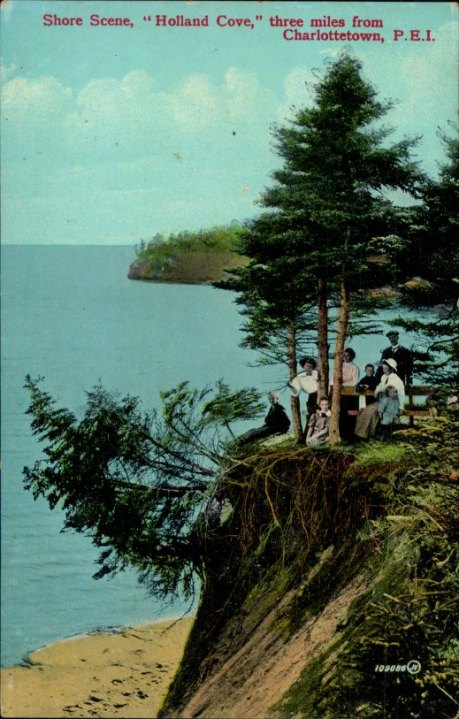 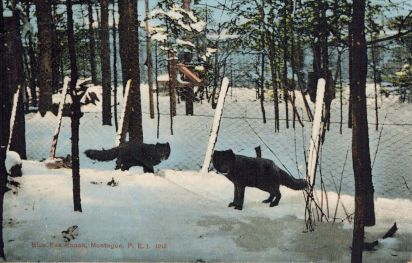 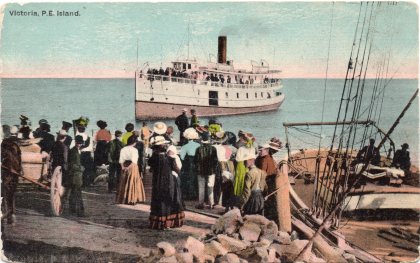 After the postcard boom died away there is no indication that Maddigan continued in the card business. He no doubt eventually sold off his stock and returned to concentration on the grocery lines. Richard Maddigan died on 24 February 1928 and by the end of April the shop fittings and equipment in his store had been auctioned off.

Note:  The Toronto Post Card Club web site has a number histories of Canadian postcard publishers as well as checklists of cards from some of them.