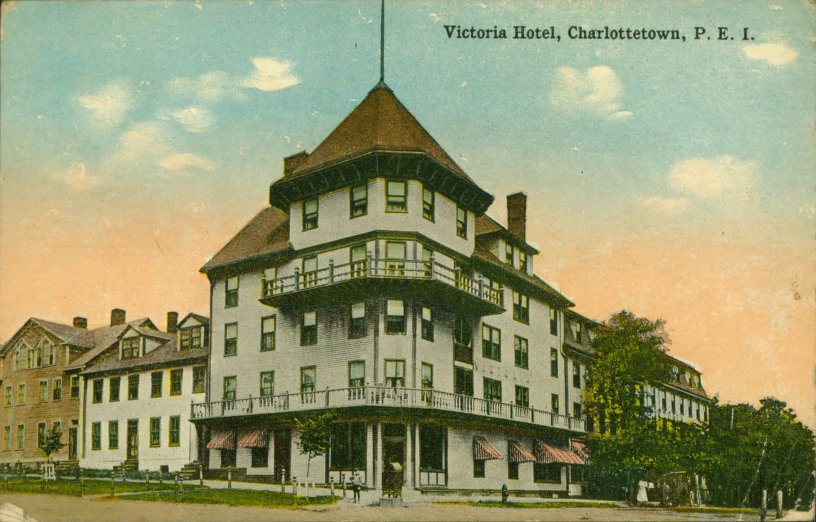 During the 19th century a constantly recurring complaint of both travellers and the merchants of Charlottetown was the lack of quality accommodation for visitors to Charlottetown.

However, by the end of the century there were two large hotels strategically located on Water Street at the head of the Steam Navigation Wharf and bracketing the southern end of Great George Street.  To the west was the modest Queen Hotel. On the other side of the street was the far more impressive Hotel Davies with its impressive five-storey corner turret overlooking the steamer wharf and Great George Street. The eastern block of the Davies was built first with the corner section added before 1900.

The Davies was the leading hotel in the city with rooms at $2.00 a day or $10.50 a week. The dining room was the site of major banquets and meetings. It also earned a reputation as one of the few where one could get a drink in the time of increasing temperance sentiment. This was to prove more of a problem after the passage of a Prohibition Act in 1900. Early in 1903 the proprietor, Patrick Doherty, faced his third offence under act and was sentenced to six months. In his absence his wife ran the business.  In the fall of that year he closed the hotel and alarm spread within the business community that it would not re-open leaving the city once more without first-class accommodation.

The gap was filled when R.H. Sterns bought the business, changing the name to the Hotel  Victoria.  He undertook a number of improvements to the building with Bruce Stewart & Co. providing plumbing for 15 bathrooms in the structure. It would later have telephones in each room with a private switchboard, the first in the City.  Sterns also took steps to promote the hotel and in June 1904 the following note appeared in the Charlottetown Guardian

R.H. Sterns, the energetic proprietor of the Victoria Hotel is issuing very tasty booklets and souvenir postals. They contain excellent views of the golf links, scenes from Tea Hill, Great George street looking towards the hotel and the Hotel itself.

The following year a new card of the hotel appeared, this one with views of both the exterior and interior of the building. 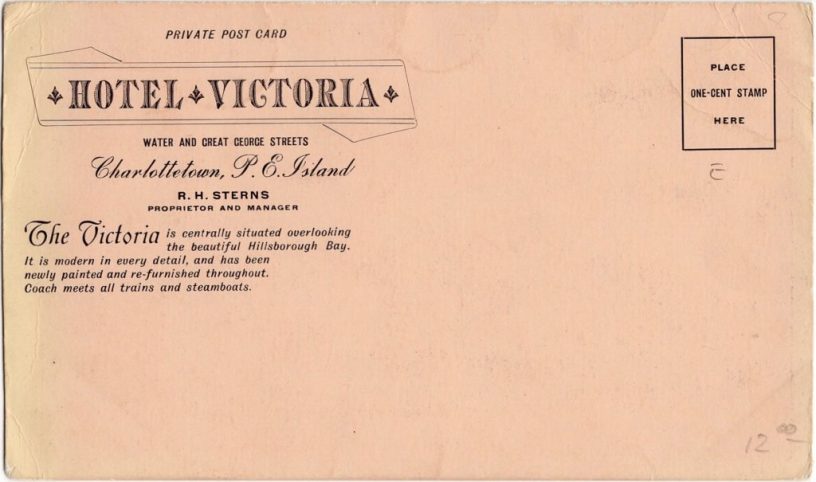 It is probable that both of these cards were locally produced as the printing firm of Haszard and Moore published a not-dissimilar series at this time.

As the biggest and best hotel in Charlottetown and, indeed the province, it is not surprising that the building is the subject of quite a number of postcards. Almost without exception they highlighted the turreted corner block of the structure with its harbour views but as the years passed there were subtle differences in the view, and in the hotel itself.

In September 1919 Sterns indicated an interest in selling the Victoria . A local company was quickly formed with many leading businessmen coming forward to acquire shares and take over management of the operation.  By June of 1921 the Charlottetown Hotel Company had also taken on ownership of the nearby Queen Hotel. Sterns concentrated his attention on the Beach Grove Summer Hotel, located not far from the city.

Renovations and improvements at the Victoria meant that within a year fifty of the hotel’s rooms had baths. However it seems that part of the hotel was closed in the off-season. In summer the hotel could accommodate 200 guests, in winter the number was half that. One feature of the public rooms of the hotel was a display of Island views by photographer W.S. Louson.

The most recent of the cards both  show the conversion of the mansard roof and additional story added to the structure after the Great War, probably for staff accommodation. One card, taken from ground level is a view often mistaken for earlier cards; the other, probably photographed from the roof of the building across the street is a view with the prominent tower for the elevator serving the eastern wing of the building. In the early morning of 12 January 1929 fire was discovered in the building. Although the twenty-eight guests and thirty staff all made it safely out of the building the fire raged for  much of the day and by late afternoon the site was a smoking ruin.

In April the shareholders decided to sell their remaining asset, the Queen Hotel, and wind up the company. The expectation that the Canadian National Railways would build a large new hotel in the city was a major consideration in the decision.

I am an archivist, historian and small boat sailor. Since 2011 I have been skipper of "Ebony", a 1982 Halman Nordica 20. I sail in Northumberland Strait between Prince Edward Island and Nova Scotia. A long time interest in marine and maritime history of the region has resulted in number of publications as well as the less formal presentations in this blog series. In addition I am a member of the Charlottetown Yacht Club, PEI Sailing Association and the Northumberland Strait Yachting Association. I have a specific interest in the history of the Charlottetown Yacht Club, Charlottetown Harbour, Northumberland Strait and the vessels that have sailed there over the years. View all posts by sailstrait

This site uses Akismet to reduce spam. Learn how your comment data is processed.

Remembering that life is a comedy and the world is a small town.

A travel blog from Bolivia to Belgium via Berlin

Insights into the world of Whisky

Visitors' accounts of Prince Edward Island from travellers and tourists

Everything You Never Knew You Wanted to Know About Berlin

Explore the less popular and unknown, but interresting and captivating places in and around Berlin. Make your trip a unique one or explore the depths of your city.

Blogging the history of Atlantic Canada